Towpath, Summer Along the Delaware River 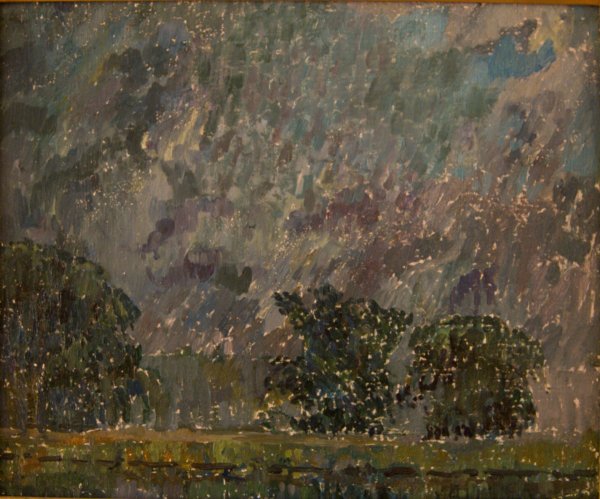 “Mary Elizabeth Price was born in 1877 in West Virginia, and at an early age she moved with her Quaker family to Solebury (Bucks County) Pennsylvania. There she received her education at the Philadelphia School of Industrial Arts and later at the Pennsylvania Academy of the Fine Arts” (1).

“She made numerous trips abroad garnering subject material from the landscapes, streets and people in Italy and France. Most of her adult life was lived in a cottage fronting on the Delaware River in Bucks County, named Pumpkinseed Cottage and she frequently painted the flowers of her garden and the landscapes from the river views. Best known for her flower compositions, her work also includes figures, landscapes, marine and genre” (1).

“Price came from a family that was well connected in the art world of New York and Bucks County. One of her brothers in Manhattan, Frederic Newlin Price, ran Feragil Galleries, which represented Price as well as such New Hope artists as Daniel Garber and Henry Snell” (1).

“In 1931, Price collaborated with fellow Philadelphia Ten painter, Lucille Howard, to paint a series of murals for the rooms of the American Women's Association clubhouse (an organization Price was chairwoman of at the time). This mural received wide acclaim as the painting technique mimicked the interwoven stitchwork of samplers and needlework, an artform that had not received proper recognition and which was done anonymously by many American girls and women. Mary Elizabeth Price was an advocate for the exhibition of women's artwork and was a pioneer in the area of art education. Price is, perhaps, best know for her paintings of decorative floral panels. These close-up, painterly renditions of peonies, poppies, hollyhocks and delphiniums often held gold or silver-leaf backgrounds.” (2).

“Price was a member of many art associations, including the Allied Artists of America, the Art Alliance of Philadelphia, American Artists Professional League, American Woman's Association, the Fine Arts Society of Arkansas, the Pennsylvania Academy of Fine Arts fellowship, and the National Association of Women Painters and Sculptors. Her work was exhibited in many venues, including the "Fiftieth Anniversary Exhibition 1889–1939: National Association of Women Painters and Sculptors," American Fine Arts Building, New York City (1939), and is represented in private and public permanent collections” (3).