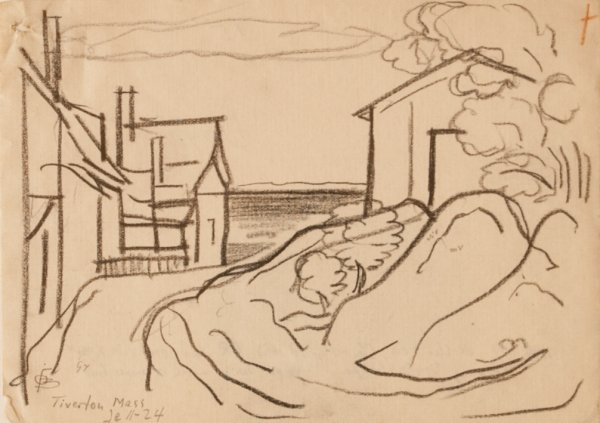 “The son and grandson of architects, Bluemner was born in Hanover, Germany, in 1867, and was encouraged to follow in his family's trade” (1).

“As a child he received some formal art training. He enrolled in the architecture department of the Konigliche Technische Hochschule (Royal Technical Academy), Berlin, and received his architecture degree in 1892” (2).

“Reportedly, a disagreement on art with Emperor William II led Bluemner to emigrate to America in that same year; he sought commissions at the Columbian Exposition of 1893” (3 300 Years of American Art).

“[He] worked in Chicago as a draftsman at the World's Columbian Exposition. After the exposition, Bluemner attempted to find work in both Chicago and New York City, but could not find steady employment. In 1903 he created the winning design for the Bronx Borough Courthouse, and for the next few years had various intermittent jobs as an architect in New York. Around this time Bluemner also began writing down his thoughts on aesthetics, art history, and art theory, which he would continue to do for the rest of his life in various journals, diaries, and notebooks” (2).

“Between 1908 and 1910, Bluemner began painting in earnest, making sketching trips throughout New Jersey and Long Island. In 1910, the year he "kicked the building business over," he met Alfred Stieglitz, who sparked his interest in the artistic innovations of the European and American avant-garde. Bluemner painted his first oil in 1911” (1).

“Visiting Europe in 1912, Bluemner was honored by Berlin’s Gurlitt Galleries with a one-man show. He became known as ‘the vermillionaire’ because of his liking for bright reds and greens. Often painting houses, barns and buildings, he possessed the touch of a draftsman” (3).

“Upon returning to the United States, Bluemner exhibited in the 1913 Armory Show, and in 1915 had a one-man show at 291. Despite participating in several exhibitions, including solo shows, for the next ten years Bluemner failed to sell many paintings and lived with his family in near-poverty. In 1916 he moved to New Jersey, living as an itinerant, until finally settling in South Braintree, Massachusetts, after his wife's death in 1926. Over the next few years, Bluemner had several prominent one-man shows at the Whitney Studio Galleries and at the Marie Harriman Gallery in New York. He was briefly employed for the Public Works of Art Project in 1934 and the Federal Art Project in 1936, but due to failing health was forced to stop painting” (2).

“Despondent over his financial situation, compounded by failing eyesight, Bluemner ended his life by suicide in 1938” (3).