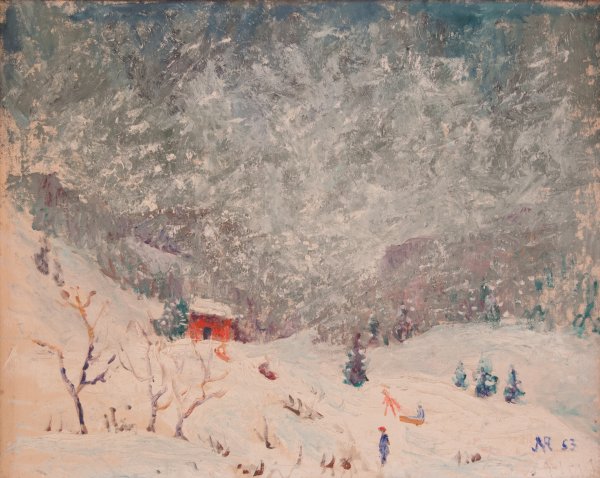 In 1958, Crown Publishers issued the autobiography of James N. Rosenberg, a Painter’s Self-Portrait. Although this artist, attorney and statesman’s portrayal of himself is self-indulgent and promotional, his artistic career was nonetheless remarkable. Now, relatively unknown, Rosenberg was capable of passionate brushwork, brilliant lighting effects and a full palette in an array of styles and techniques that showed virtuosity and variability. His playful and winsome snow scene, a featured part of our American collection, is undoubtedly one of several works translating his love of the Adirondack Mountains to canvas.

“James N. Rosenberg was a graduate of Columbia College and he received his law degree from Columbia Law School in 1898. He served for many years in the law firm led by Judge Samuel I. Rosenman. One of Rosenberg's notable cases was the reorganization in 1912 of the United States Motor Company into the Maxwell Motor Company, which later became the Chrysler Corporation. Rosenberg was also a trustee in bankruptcy in various proceedings, including representation of the Irving Trust Company, the trustee in bankruptcy of the International Match Corporation. From 1932 to 1947, Rosenberg and other lawyers recovered over $30-million for their clients, the bondholders of International Match.

In 1922, Rosenberg founded the New Gallery in New York for the exhibition and sale of works by little-known American and foreign artists. His lithograph, Dies Irae (Day of Wrath), made on the day of the Wall Street crash in 1929 appeared on the front page of the Sunday Magazine section of The New York Times in 1930.

Mr. Rosenberg retired from law practice in 1947 and devoted himself to art. His work now appears in museums throughout the United States.” His aesthetic is fresh, vibrant, playful and underestimated.

From Wikipedia, we have this information:

“He was born in Allegheny City, Pennsylvania and died in 1970, White Plains, New York. He is considered a painter, printmaker, art patron, lawyer and play write. One of Rosenberg’s most noted works is his depiction of the fateful day which shows dark storm clouds above Wall Street, as the buildings crash onto the doomed people in the street below. The title Rosenberg chose for his lithograph, Dies Irae, means "day of wrath" in Latin. He also painted March Parade of Colonel John B. Glenn (New York City, March 1, 1962), 1962, which hangs in Smithsonian American Art Museum, Gift of James N. Rosenberg through the National Gallery of Art. The painting shows Glenn's triumphant return to New York City, where an enthusiastic crowd of about four million people welcomed him home.”