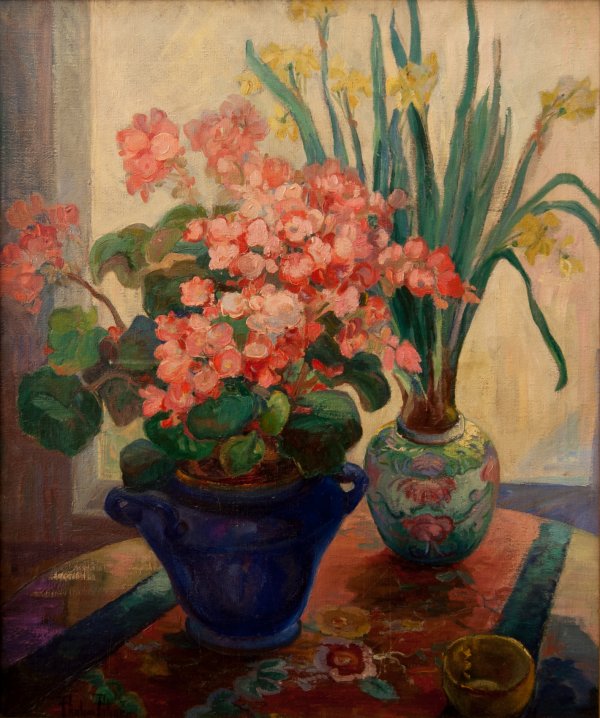 “Pauline Lennard was born in McHenry, Illinois in 1867. She attended a convent in Milwaukee as young girl before she enrolled at the Art Institute in Chicago with her family’s support and encouragement. She remained at the Institute from 1893-1898, studying with William Merritt Chase, Frank Duveneck, and Kenneth Hayes Miller” (Thurber).

“Following graduation, Palmer attended the Académie de la Grande Chaumiére and the Académie Colarossi in Paris, France where she studied under Raphael Collin and Richard Miller. While in Paris she exhibited at the Paris Salon for four consecutive years, from 1903 to 1906, and again in 1911. Her principal teacher and friend in Paris was Richard Emil Miller. Palmer traveled extensively throughout Europe, a classic right of passage for young aspiring artists of the era. Her time in Paris provided her with the opportunity to study under Gustave Courtois, Lucien Simon, and Rene Francois Prinet. Upon her return to the States, Palmer set up her studio in the famous Tree Studios building in Chicago” (Thurber).

She was “a major proponent in the traditions of impressionism in early twentieth century. … Primarily known for her landscapes and portraits Palmer rejected the waves of modernism that hit the United States in the 1920s and instead stayed true to the traditions of impressionism.  In 1923 she established the Association of Chicago Painters and Sculptors as an alternative to the increasing number of institutions celebrating the influx of abstractionist and cubist artists” (Thurber).

“Palmer was adept in oil, pastel, tempera, and watercolor. In addition to portraits, she painted numerous studies of women and children as well as landscapes. Her work matured from a dark, tonal, academic approach to a conservative impressionism in which forms are suggested by distinct brushstrokes of brilliant color that emphasize the effects of full sunlight (M. Christine Schwartz Collection).

“Palmer exhibited widely during her lifetime, including expositions in Buffalo, St. Louis, and San Francisco. Her works were shown at the National Association of Women Painters and Sculptors, and starting in 1899, she exhibited annually at the Art Institute of Chicago for another twenty-seven years. Over her lifetime, she exhibited over 250 paintings at the Art Institute of Chicago both as a student and professional. Winning nearly all of the museum's major awards, purchase prizes, and honorable mention citations, Pauline Palmer became a household name in Chicago. She also won a gold medal at the Colovassi Academy and a bronze medal at the Academy de la Grande Chauniere“ (Thurber).

“In 1938, Palmer embarked on an "artist's tour" of England and Scandinavian countries with her sister Marie Lennard. While in Trondheim, Norway, she became ill with pneumonia and died on August 15th. Considered by her critics and the up-and-coming artists of the day to be a traditionalist, Palmer continues to be regarded as one of the leading women in American painting. Her light and colorful compositions captured American scenes with a seeming effortlessness and freshness. Celebrated in life as "Chicago's Painter Lady," Palmer was honored twelve years after her death by the establishment of an annual award given in her honor by the Art Institute of Chicago” (Thurber).