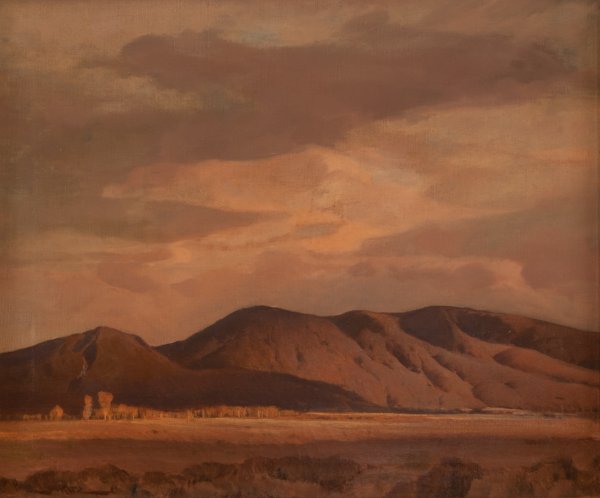 Paul Lauritz (1889-1975) was born in Larvik, Norway. Growing up in Norway, Lauritz was exposed to many famous painters ----- including local artists Fritz Thaulow and Christian Krohg ----who encouraged him as a young man and influenced his artistic development. In his personal evolution, he became a California-based artist of distinction, focusing on portraiture and the quietude and vast space of desert landscapes.

At age 16, he headed west and earned a job in Vancouver, Canada, and then Portland, Oregon as a commercial artist doing maps, posters and decorations. In 1912, he married Mary Potterton and the couple soon moved to Alaska in search of gold. Although Lauritz did not find his fortune during the years spent in Alaska, he found inspiration for several paintings and met Alaskan artist Sydney Laurence with whom he eventually exhibited.

Shortly after World War I, he and his wife moved to Los Angeles. He worked at a studio doing portrait painting on Spring Street in the old Lyceum Theater. In 1920, Lauritz and his wife moved to the hills overlooking the city and built the first dwelling on Clayton Avenue. He developed a fascination for desert landscapes and used gigantic brushes and pre-war French bristles. He also used a palette knife and even his hand to achieve a textural effect while he regularly employed a limited palette of earth tones.

He was active in the California art scene as a member of the Los Angeles Municipal Art Commission and President of the California Art Club. Lauritz taught at the Chouinard School of Art and the Otis Art Institute and was a member of the Painters and Sculptors Club, the Laguna Beach Art Association, the Royal Society of Art in England, and the Salmagundi Club in New York.

Throughout his career, the primarily self-taught artist was bestowed with numerous awards for his work from museums, expositions, and clubs throughout California. His work was sold by the Artists Guild of America and the Vose Galleries of Boston. During World War II, the King of Norway purchased one of his marine paintings that was transported to his native Norway by submarine.