Still Life with Daffodils and Figure 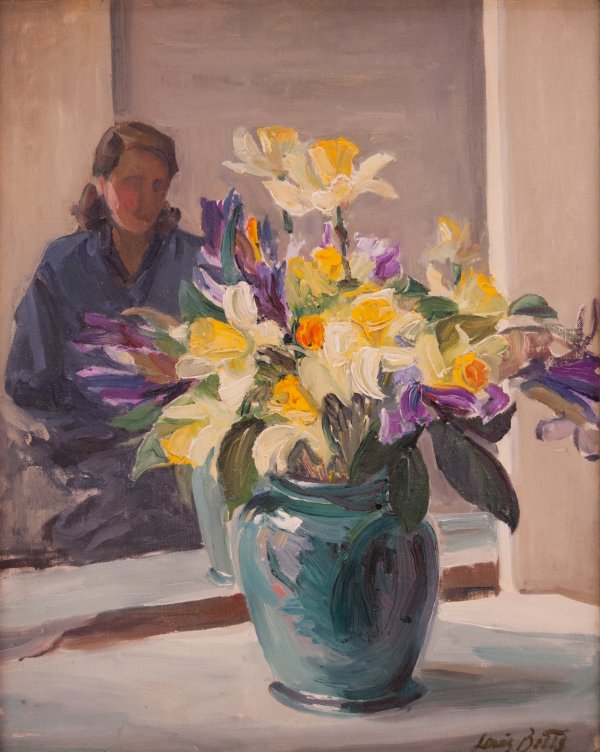 Louis Betts was born in October 5, 1873 in Little Rock, Arkansas.

What was happening in the world at the time of his birth? This was months before the Sociètè anonyme coopèrative des artistes peintres, sculpteurs et graveurs was organized by Monet, Renoir and other artistic confederates in France who had been denied a place to show their art in the Paris Salon. Tchaikovsky composed "The Tempest," and The Women's Christian Temperance Union became the first women's mass organization in the US with the goal of Christian-based social reform. Republican Ulysses S. Grant was serving out his second term as President of the United States.

"Betts entered the Pennsylvania Academy of Fine Arts in 1894, studying with William Merritt Chase, an important artist of the era, known for his portraits and pleasant scenes in an Impressionist style. A still-life of Betts's entitled Oranges, in the Arkansas Arts Center's collection, is dated to 1889 and was perhaps a studio exercise. A portrait of the young Betts that was probably a classroom demonstration by Chase shows a studious figure wearing rimless glasses. Betts's preference for portraits and genre subjects, as well as his loose painterly style, shows the effectiveness of his training with Chase. In 1902, he received a Cresson Traveling Scholarship, which allowed him an extended period of study in Europe, especially the Netherlands and Spain, where he learned much from studying the portraits of the seventeenth-century painters Frans Hals and Diego Velázquez. That study was undoubtedly at the suggestion of Chase, as they were models for his own work. Both artists are noted for their expressive brushwork and abilities to suggest a sense of vitality in their sitters.

Following his European studies, Betts returned to Chicago in 1906 but was living in the New York City area by 1910. In 1926, he was listed as living on 19th Street in New York City. He first exhibited at the National Academy of Design in 1902, and was elected an associate in 1912 and a full academician in 1915. He was an active member of this important national organization, winning prizes at a number of annual exhibitions (1902, 1918, 1931, 1932, 1933, and 1937) and serving on the organization's governing Council from 1919 to 1922 and from 1930 to 1933. Betts's success is also seen in his regularly exhibiting at the Salmagundi Club and the Century Association, both in New York, and also with the Allied Artists of America, an exhibition cooperative formed in 1914 in New York. Betts won a gold medal at the latter's 1931 exhibition. He also won important prizes at the St. Louis Exposition (1904), Pittsburgh's Carnegie Institute (1910), and the Art Institute of Chicago (1920).

Some of Betts's subjects were prominent figures of the first half of the twentieth century in the United States, including author Booth Tarkington, art critic Royal Cortissoz, Drs. William and Charles Mayo, and William O. Goodman, founder of the Goodman Theater in Chicago. His portrait of the Illinois senator James Hamilton Louis was placed in the U.S. Capitol in 1940. The Art Institute of Chicago has an impressive pair of full-length portraits of Martin Ryerson and his wife (1912–13) that—in their emphasis on dark colors, plain backgrounds, and sense of presence—owe much to the Spanish Baroque artist Velázquez. The Ryersons were important collectors who gave much to the Art Institute. Also in Chicago is Betts's 1905 portrait of the Art Institute's director from 1879 to 1914, William Merchant Richardson French."

Louis Betts was living in Bronxville, New York when he died on August 13, 1961. His works can be found in the Art Institute of Chicago, Indianapolis Museum of Art, Morris Museum of Art in Augusta, Georgia, U.S. Senate Art collection, National Academy of Design Museum, National Museum of American Art-Smithsonian and the Yale University Art Gallery and collections in fine universities and private collections.