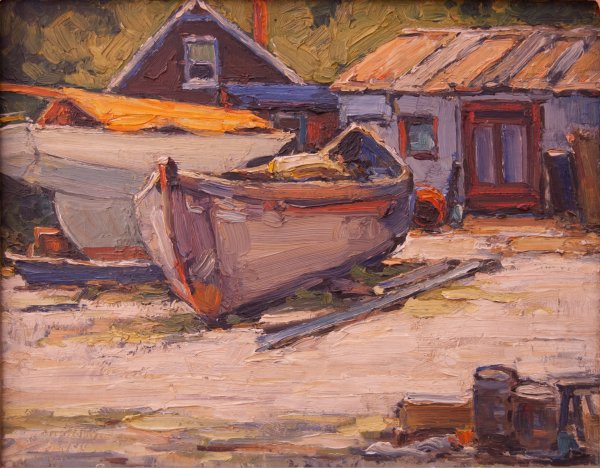 Walter Farndon, 1876-1964, was a painter of scenic landscapes. He was born in Coventry, England and came to the United States to settle in Yonkers, NY. His career started in the early 1890s, painting floral motifs in watercolor for a carpet factory.

What was happening in the world at this time? Queen Victoria was the aging monarch of the United Kingdom and Sir Arthur Conan Doyle published “The Adventures of Sherlock Holmes,” the Gilded Age in America was giving way to the Gay Nineties and the beginning of the Progressive Era. Idaho and Wyoming were admitted to the Union.

When Farndon decided to leave the carpet factory to enroll in the free school of the National Academy of Design, he began his studies with genre-realist Edgar M. Ward. Farndon also studied with Robert Henri later in his career. In 1928, when the Lights of New York, the first all-talking feature film was released by Warner Brothers, Farndon was elected an Associate of The Academy. Farndon became an Academician in 1937. He was a member of the Society of Independent Artists as well as the New York Water Color Club, the American Watercolor Society, the Allied Artists of America, the American Artists’ Professional League, the Guild of American Painters, the National Arts Club, the New York Society of Painters, the Grand Central Art Galleries and the Salmagundi Club. He exhibited his work and won numerous prizes throughout New York and New England at the Pennsylvania Academy, the Art Institute of Chicago, the Corcoran Gallery and the Boston Art Club. Vose Galleries mounted five solo exhibitions of Farndon’s oil and watercolor paintings in 1991, 1992, 1994, 1996 and 2006.

Farndon principally painted en plein air and is best-known for impasto riverside, harbor and shore scenes. Working along the East Coast with a primary focus in New England, he found favorite seaside locations including Monhegan Island, Boothbay Harbor, Gloucester, and Nova Scotia. Throughout the 1920s, he painted in Ridgefield, New Jersey, and was part of a group called the Country Sketch Club, which found its inspiration in nature.

Farndon passed away in Valley Stream, on NY's Long Island in 1964. He stated his artistic credo (as seen in notebooks bequeathed to the Smithsonian) simply: "The principal payment for an artist is the personal satisfaction of creating beauty (as personally seen and felt), and giving to viewers some of the pleasure you have experienced in the producing."