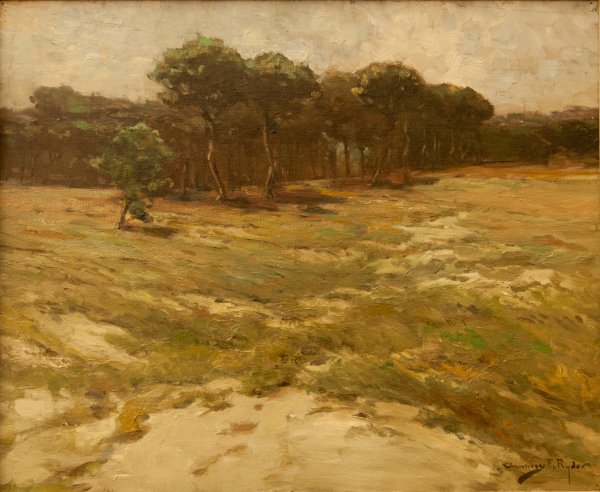 Chauncey Foster Ryder was born in 1868 in Danbury, Connecticut. He grew up in New Haven. In his 20s, he moved to Chicago and supported himself as an accountant while he was a student at the Art Institute of Chicago and at Smith's Art Academy, where he later taught. He married Mary Keith Dole in the early 1890’s. His interest in portraiture led him to enroll in the Academie Julian in Paris in 1901, studying with Raphael Collin and Jean Paul Laurens. He exhibited in the Paris Salon from 1903-1909, winning an award from there in 1907. He painted at the port town of Etaples, France with other American artists, including Max Bohm and Roy Brown.   He continued his travels through France, Italy and Holland, his interest in landscapes growing throughout his travels.

What was happening in the world when Chauncey was developing his personal aesthetic? In the 1870s and 1880s, when Chauncey was studying and beginning his art career, he may have seen headlines such as “First Army-Navy game won by Navy 24-0,” “Grand Opening of The Music Hall [Carnegie Hall]: guest conductor, Peter Ilyich Tchaikovsky,” and “Lizzie Borden Acquitted!” Through his career, Ryder may have been aware of many firsts happening in the United States, including: the first Indianapolis 500 race in 1911 (won by Ray Harroun), the ratification of the 16th Amendment allowing a federal income tax (1913), the groundbreaking underwater photography of the silent film 20,000 Leagues Under the Sea(1916), and the first non-stop transatlantic flight from Roosevelt Field, Garden City, New York to Le Bourget Field in Paris, France by Charles Lindbergh in the Spirit of St. Louis, 20-21 May, 1927.

Shortly before 1910, Chauncey Ryder returned to America, settling in New York City, and after only several months of a business relationship, became one of the Macbeth Gallery artists. Ryder established residence in Wilton, New Hampshire where he spent the majority of the year, living the colder months of the year in New York City. In 1910 and 1911 he painted and exhibited at Old Lyme, Connecticut. Much of Ryder’s work was of the as yet mostly untouched New England landscapes near his summer home and throughout New England. He produced lithographs, illustrations, etchings, watercolors, drypoints and drawings in addition to the landscape oils he was best known for.

Ryder was active with the National Academy of Design (becoming an Academician in 1920), the Salmagundi Club, the National Arts Club, Allied Artists of America, the American Watercolor Society, the Watercolor Societies of New York and Baltimore, the American Federation of Arts, Brooklyn Society of Artists, Chicago Society of Etchers, Lotos Club, and the National Arts Club. His work has been shown in the Art Institute of Chicago, the Brooklyn Museum, the Corcoran Gallery, the Dayton Museum of Arts, the Metropolitan Museum of Art, the National Gallery in Washington DC, and the St. Louis Art Museum. Chauncey Foster Ryder died in Wilton, New Hampshire in 1949.