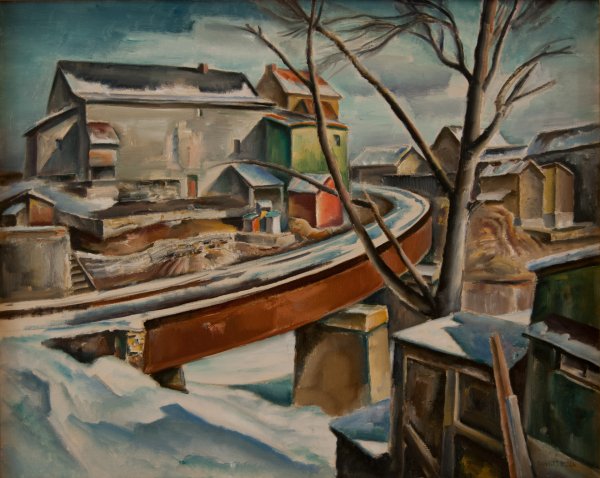 “Charles Rosen was born on a farm in 1878 in Reagantown, Westmoreland County, Pennsylvania. He opened a photographic studio at the age of sixteen in West Newton, in the coal mining region of western Pennsylvania. He moved to New York City in 1898 to enroll in painting classes at the National Academy of Design, where he studied with Francis Coates Jones. While in New York, Rosen took classes at the New York School of Art, where he studied with William Merritt Chase and Frank Vincent DuMond and became interested in landscape painting. In 1903 the artist married Mildred Holden. The couple moved to the New Hope area, where they lived for the next seventeen years (1).”

“[He] became part of The Bucks County Art Colony along with William Langston and Edward W. Redfield. Rosen and some friends then formed the New Hope Group (2).”
“He lived primarily in Woodstock until his death in Kingston, New York in 1950 with the exception of several years in Texas. In 1940, Charles Rosen worked in San Antonio, Texas as director of the Witte Memorial Museum School of Art to replace Henry McFee, who had resigned. He remained until the school closed in 1942, but then became director for of the Koogler McNay Art Institute in San Antonio (3).”

“By 1916, Rosen had achieved his mature impressionist style, which often combines a sense of the decorative patterning found in nature, as well as its more dynamic, vigorous aspects. From 1919 until 1921, when the artist began working in a more modern style, he served as an instructor and later director of the Art Students League summer school in Woodstock, New York. He moved permanently to Woodstock in 1920, and became closely associated with the Woodstock Artists Colony. He adopted a cubist-realist style, which would characterize his work until his death in 1950. Rosen's paintings are in the permanent collection of the James A. Michener Art Museum. A retrospective [sic] exhibition of his work was held at the Michener Art Museum in New Hope in 2006 (1).”